What is a CBF Church?

How many CBF churches are there in North Carolina?” is a question I am often asked. There is no simple answer to that question. The problem is with defining what is meant by “CBF church.” In Baptist polity, each church is unique and determines with whom and to what extent it affiliates with other organizations. The way churches relate to CBF and CBFNC, which are also autonomous bodies, is different with each church. In general, there are six primary ways in which a congregation may think of itself as a “CBF Church.” 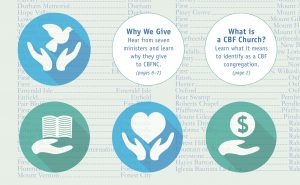 Financial
CBFNC’s Bylaws state, “The membership of CBFNC shall be composed of individual Baptists of North Carolina who either: (1) Contribute directly as individuals, or (2) Are members of a church that contributes to the ministries and operations of CBFNC.” CBF has similar language in its bylaws.

So, unlike a convention, the members of CBFNC are not churches but individuals. Still, the majority of CBFNC’s funding comes from churches and the easiest indicator of a church’s affiliation with CBFNC is financial support.

Churches choose whether and how much to support CBFNC and CBF. A few churches support only one or the other. Most support both.

Still, to respect the freedom and individuality of both the churches and each CBF organization (state and national), we list contributing churches to CBFNC once a year in The Gathering (see pp. 8–10) and on our website.

Constitutional
Some churches state in their Constitution or Bylaws that they affiliate or partner with CBFNC and/or CBF. This is a very clear indicator on the part of the congregation that they are a “CBF church.” We don’t have an official list of these churches, as they rarely report this information to our office.

Promotional
Many churches promote CBF and CBFNC events and ministries in their publications. Such promotion is a strong indicator that they are involved in and supportive of CBF organizations and see themselves as a “CBF Church.”

Missional
Many churches, year in and year out, participate in the mission and ministries of CBF and CBFNC. They attend assemblies, send their youth to CBFNC retreats, take mission trips to CBF mission sites, work with CBF missions personnel, apply for CBF funding, work with CBF partners, and engage missionally with CBF in a wide variety of ways. That would indicate that they probably see themselves as a “CBF church.”

Ministerial
Theological education has been a strong component of CBF ministries at the state and national level throughout our history. Pastors, staff ministers, and chaplains find a home in CBF life at a high rate. Many ministers participate in CBF peer learning groups and professional development opportunities. Ministerial search committees often call on CBF staff to assist with their searches. Even when they don’t understand or appreciate all that CBF organizations do, many churches sense that they want a “CBF pastor” who is a servant-leader, not an authoritarian dictator. If their minister is under 50, they probably sought one who attended a CBF partner theological school. Churches who value this kind of minister are in this most critical way a “CBF church.”

Spiritual
As with the previous indicator, some congregations are “CBF churches” in a spiritual sense rather than in an organizational sense. They know they are different from other Baptist churches in their community. They value Walter Shurden’s Four Fragile Freedoms – Soul Freedom, Bible Freedom, Church Freedom and Religious Freedom. They ordain women as deacons and ministers. Women can teach men in Bible classes and serve in any leadership role in the church. Some churches have a “CBF DNA” even though they are not officially connected to CBF in other ways. More than once someone has said to me of their church, “We are CBF and don’t know it.”

What is a CBF church? On the one hand, there really is no such thing. Baptist churches are free churches, not franchises of a larger denominational body. On the other hand, free Baptist churches often value cooperation and choose to affiliate with other bodies, including CBF bodies, in a variety of ways.

Is your church a “CBF church”? How do you know?

This originally appeared in the July/August issue of  The Gathering.