Citizen-Soldiers Answer the Call to God AND Country

Most of us are familiar with the term, “Citizen-Soldier.” It refers to a large segment of the modern military and encompasses members of the National Guard and the reserves of various branches of the military. Approximately one-third of all military personnel are Citizen-Soldiers. They hold down regular jobs, take time off from those jobs to drill with their military units, and must be prepared to be called up to active duty with little notice.

Some of these citizen-soldiers have been activated recently to deal with the COVID-19 crisis. Two CBFNC pastors are in this group. They are CBF-endorsed military chaplains. Here are their stories.

Most days, Scot McCosh is pastor of Mt. Pisgah Baptist Church in Fayetteville. He serves this congregation along with his wife Paula, who is the church’s associate pastor for Family Ministries. Scot also serves as a chaplain in the U.S. Army Reserve and is assigned to the 77th Operational Response Command, which provides support in the event of chemical, biological, radiological and nuclear problems.

Scot’s unit was recently deployed to Salt Lake City, Utah, where they are helping deal with the COVID-19 crisis in the western U.S.  He left behind his family and his congregation to serve with the Army for an unspecified amount of time. 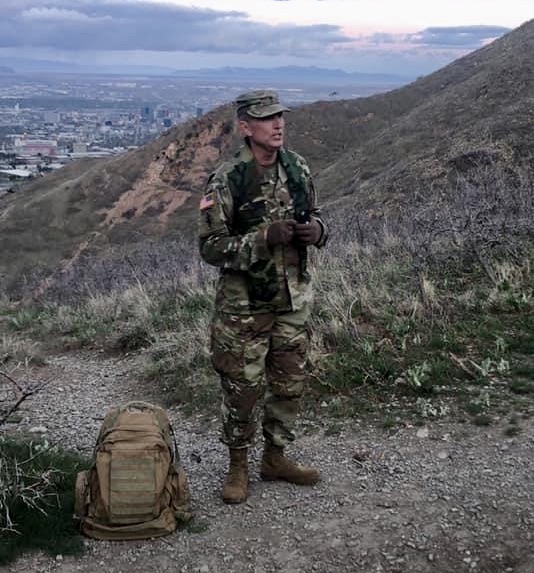 As an army officer and chaplain, Scot’s job is to provide spiritual care to the soldiers in his unit who are working with other governmental agencies to stop the spread of the virus in the western states. These soldiers are far from home and experience a great amount of stress. Though Scot is a Baptist, he ministers to soldiers from a variety of faith backgrounds.

Like all pastors these days, Scot also continues to minister to his congregation back in Fayetteville. Thankfully, modern technology allows Scot to conduct worship services and weekly Bible study online for his congregation, as well as remain in contact with church leaders and members.  He has even started “MPBC-TV” (videos posted on Facebook) to provide updates and words of encouragement to the church.

While far from home, Scot remains concerned for his family and the families of the soldiers to whom he ministers. “Please pray for our families back home. They bear a huge burden as our spouses solo-parent, maintain jobs and ministries, and live with constant anxiety over the safety of their loved ones” he shared.

Like Scot, Gary Nistler is a member of the Army Reserve. He also pastors Sandy Cross Baptist Church in rural Gates County, in northeastern North Carolina near the Virginia state line. He is assigned to the 18th Field Hospital, which is headquartered at Fort Story, Virginia. A few weeks ago, Gary’s unit was called up and he was given only a short period of time to report to Fort Story.

He remained there for 14 days while the unit prepared to deploy to New York to set up a field hospital or support local hospitals in the area. He says the stress on the soldiers was tremendous as they worried about family back home and the uncertainty of their period of deployment. He spent hours counseling soldiers one-on-one. Attendance at chapel services was much higher than normal. “We did not know how long we would be gone. We’re in this fight until it’s won. In that sense, it feels like a World War II type of situation,” he explained.

During this time, Gary continued to minister to his congregation back in Gates County. He conducted worship services over Facebook Live and stayed in touch with church leaders and members via Facebook, email and phone.

When the time came for the 18th to travel to New York, only some of the personnel were allowed to go. Those deemed “non-essential” for this particular mission, including chaplains, were sent home. Even though he is not physically with his unit, Gary continues to minister to them in much the same way he ministered to his congregation while he was at Fort Story. In a sense, he now has two congregations, both of whom receive his ministry remotely.

“I don’t like the term ‘social distance,’” Gary notes. “I prefer ‘spatial distance’ because we can and must remain connected socially. That is essential for our mental and spiritual health.”

Another CBFNC pastor, Mark Reece, pastor of First Baptist, Elkin, serves as a CBF-endorsed military chaplain. Mark is a Lieutenant in the Naval Reserve, attached to the III Marine Expeditionary Force in Okinawa, Japan, and trains monthly with the 4th MLG Comm Company at the Navy Operation Support Center in Greensboro. So far, Mark has not been called up, though he remains at the ready should the need arise.

Please pray for these pastors, their churches, their families, the military personnel they serve, and all Citizen-Soldiers. Their work is vital, not only to the safety and security of our nation, but also to our fellowship and the

Help for Pastors/Worship Leaders Needing a Break
May 19, 2020

How does our faith inform our decisions moving forward beyond COVID-19?
May 4, 2020